Lewis Hamilton will start on pole position in tomorrow's Belgian Grand Prix as Formula 1 gets back to work after its month long summer break.

Hamilton was able to time his final qualifying lap to the ideal moment to benefit from a drying track following heavy showers late in the session.

Alongside the Mercedes on the front row tomorrow will be Ferrari's Sebastian Vettel. Force India celebrated their return from financial strife by sensationally locking out the second row with Esteban Ocon and Sergio Perez.

Conditions were very cool and somewhat cloudy for the start of qualifying, with teams keeping a wary eye on the sky in case of one of Spa's notorious pop-up showers decided to put in an appearance during the course of the hour.

Q1: Raikkonen top, but disappointment for McLaren and Williams

First out when the track went green were the Haas cars of Romain Grosjean and Kevin Magnussen, together with Toro Rosso's Pierre Gasly. Also not hanging around was Lewis Hamilton, whose Mercedes was sporting a set of soft tyres which was also the choice of Ferrari pairing Sebastian Vettel and Kimi Raikkonen. By contrast, the Red Bulls were starting on supersofts.

Hamilton soon assumed control of the timesheets with an initial lap of 1:43.543s but he was quickly displaced by the Ferrari duo, Raikkonen edging his team mate by half a second on the first run. The top three were considered safely through to Q2, but Daniel Ricciardo's time in fourth was a second slower and distinctly more at risk.

Max Verstappen soon demonstrated that Red Bull more than had sufficient pace by briefly moving into third ahead of Hamilton before the Mercedes found extra time to jump back up to second. There were strong laps by both Force India drivers with Esteban Ocon moving into fifth ahead of Sergio Perez, and Charles Leclerc continuing to do a fine job for Sauber this weekend in seventh ahead of Renault's Nico Hulkenberg. That had pushed Ricciardo down to 12th. His next lap was only good enough for 10th, but he still wasn't looking in any particular danger of elimination with the bottom five being taken up by two Williams, two McLarens - and Valtteri Bottas, who was out late in the knowledge that he would be starting from the back row of the grid on Sunday due to his latest engine changes, along with Hulkenberg.

When he did make his run, Bottas immediately punched in a time good enough for second overall which was just 0.220s off Raikkonen's benchmark. Ricciardo meanwhile had to abort his own latest flying lap, forcing the team to stage a rapid pit stop to take on fuel before making another run. When he did finally complete a quick lap it was good enough for seventh and comfortably through to the second round.

Also improving late in the session were the two Haas cars, looking much better today than in Friday's lacklustre practice. A late improvement from Marcus Ericsson put the second Sauber in the top ten as well, squeezing Ocon, Perez, Hulkenberg out but all of them still safely through to Q2 along with the two Toro Rossos of Brendon Hartley and Pierre Gasly.

Carlos Sainz was the surprise casualty of the round, the second Renault ending up only 16th fastest and duly eliminated from the session. McLaren's experiments with a 'tow' failed to deliver and Fernando Alonso and Stoffel Vandoorne never looked likely to progress; neither did the Williams cars of Sergey Sirotkin and Lance Stroll.

Kimi Raikkonen was first out in Q2, quickly followed by Hamilton, Vettel, Verstappen and Ricciardo with all five straight on to supersofts. The Finn was the first to lay down the gauntlet with a 1:41.627s, already faster than last year's pole time.

Hamilton was 0.184s off and Vettel a further three tenths back in third. Verstappen was almost a second off Raikkonen's target time after locking up in the first corner; Ricciardo was a further half a second back in fifth ahead of Grosjean and Magnussen, Perez and Ocon, and Gasly and Hartley.

A final run for Vettel saw him oust his team mate at the top of the times with a 1:41.501s, a new track record, while Bottas once again made a late appearance in the session and successfully went fourth behind Hamilton.

As a consequence, the two Toro Rossos found themselves bundled out of the top ten along with both Saubers. Nico Hulkenberg was also eliminated as he decided to stay tucked up in the garage for the duration knowing that he would be starting from the back row tomorrow.

Almost the minute that the chequered flag came out at the end of the second round of qualifying, a brief shower passed over pit lane to set nerves jangling ahead of the final top ten pole shoot-out round. Although the rain quickly abated, all the drivers were lined up on pit lane well in advance of the green light for Q3.

Everyone was out on slicks, but they were still on their outlaps when another, stronger pulse of rain swept over the circuit. First to feel its effects was Bottas who had led the field off pit lane only to end up spinning off at Blanchimont. Teams immediately called their cars back to pit lane for intermediates, with the exception of Force India who told Ocon and Perez to go for a timed lap only to have to abort a few corners later.

Ricciardo had been one of the first cars onto the inters, but even so the Red Bull promptly locked up at La Source and then skated across Les Combes suggesting that full wets might be required. He went on to set a time of 2:04.986s which was soon bettered first by Verstappen and then by Raikkonen both of whom were two seconds faster than the Australian. With the rain starting to ease off again, Vettel jumped to the top with a lap of 2:02.446s. Hamilton's first run saw him in fifth place, and his next flying lap was squandered when he pushed too hard and briefly went off at Pouhon.

Vettel continued to move the goal posts with his next effort clocking in at 2:01.188s to put him over a second clear of the rest. The improving conditions were underlined by Perez jumping to second place, and then Hamilton found another three seconds to take provisional pole with a time of 1:58.179s.

Vettel tried to fight back, but his final effort was only good enough for second just ahead of a late flier from Ocon who will share the all-Force India second row with Perez. Grosjean was fifth fastest ahead of Raikkonen who apparently hadn't had enough fuel to make a further run as the track started to dry up.

Verstappen and Ricciardo dropped to seventh and eighth in the final flurry, while Magnussen will line up in ninth place on the grid. Bottas didn't set a time in Q3 due to his grid penalty.

Hamilton could have taken pole 'even in the dry' 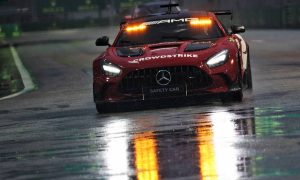